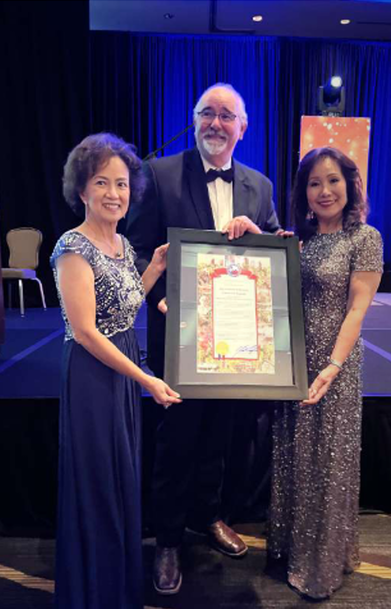 The Chinese American Citizens Alliance, Houston Lodge president Alice Hung, stated that C.A.C.A. Houston Lodge was established on 1954 as part of the National C.A.C.A organization. The Miss Chinatown Houston Pageant took place in 1971. Today, the pageant is an annual event and is one of the highlights of the gala events in the Houston community.

The pageant acknowledges young women of Chinese descent who are exemplary members of the Chinese American community, promotes artistic expression and intellectual growth, and provides opportunities for women to learn about their heritage and give back to the Houston community.

The 50th Anniversary of the Miss Chinatown Houston Scholarship Pageant is organizing and planning by Pageant Chair Betty Gee and co-chairs Grace Lynn and Tammy Su. Emcees for the event were Rose-Ann Aragon and Jonas Chin, they were enthusiastic and lively, and their quick on-the-spot reaction and interaction enhanced the atmosphere of the audience.
​
There are nine contestants in the Houston Pageant this year. Start from self-introduction, swimsuit section, talent competition, qipao deportment and Q&A, etc. The finally selection by five judges are Miss Christine Yuan, an 18 year old Clements High School graduate captured the title, First Runner Up/Miss Chinese New Year winner is Miss Nicole Quan, Second Princess is Angel Liu, and Miss Talent is Angie Tai.

Miss Christine Yuan will be representing Houston at the Miss Chinatown USA pageant in San Francisco in 2023.